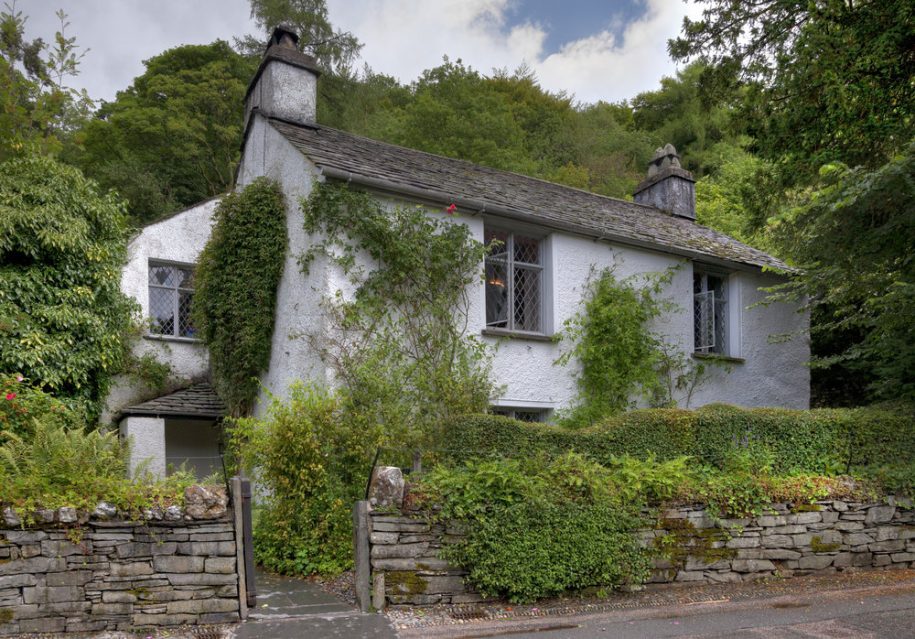 Famous poet and author, William Wordsworth was born on 7 April, 1770 in a fine Georgian house in Cockermouth, which was owned by Sir James Lowther.

The River Derwent flowed past the back garden of the house, and was a wonderful place for young William Wordsworth to grow up and explore with his siblings, Richard, Dorothy, John and Christopher.

Most of Wordsworth´s childhood was spent in Cockermouth and Penrith, where his mother came from. William and his sister Dorothy attended infant school in Penrith between 1776 and 1777. His mother died when William was only 8 years of age, and his father died when he was 13.

In 1800, the Wordsworth family met Samuel Taylor Coleridge and Robert Southey while staying in Dorset. The trio became great friends, and William introduced them to the Lake District, visiting Temple Sowerby, Grasmere and Wasdale Head.

During one of their visits, Wordsworth came across Dove Cottage, formerly an old inn called the Dove and Olive Branch.

William and his sister, Dorothy moved into the cottage in 1799. Dorothy became the budding poet´s secretary, and was a major part of his life during his time in the Lake District. William married Mary Hutchinson in 1802. The couple had 5 children.

Samuel Taylor Coleridge and Robert Southey moved into Greta Hall in Keswick, and formed strong working and personal bonds with William and his family. Southey was Poet Laureate from 1813-1843, and lived in Keswick for 40 years.

Thomas de Quincey was a permanent guest at Dove Cottage, and the entire family moved to Allan Bank in Grasmere, in 1808 as it was a larger residence. Having stayed at Allan House, along with friend and poet, Samuel Coleridge, William Wordsworth then moved to the Old Rectory, described by the poet as ´cold and damp´. Wordsworth´s two youngest children died in the house.

Dove Cottage is now open to the public, and is one of the Lake District´s most famous attractions. Visitors flock to the house from all over the world, and the poet´s former residence retains much of its original character and charm.

William purchased the Rash field nearby with the intention of building a house. Although the house never materialised, the land is known as ´Dora´s Field´. During his time at Rydal Mount, in 1820, William published the ´Guide through the District of the Lakes’. In 1842, he became Poet Laureate, and resigned as Distributor of Stamps for Westmorland.

In 1850, at 80 years of age, William caught a cold while out walking in the countryside. He died on 23 April, St George´s Day. Along with his loyal wife Mary, who died 9 years later, a simple tombstone stands in the churchyard of St Oswald´s Church, Grasmere. It has become one of the most visited literary shrines in Europe.

Wordsworth wrote over 70,000 lines of verse. For example, perhaps the most famous poem ´I Wandered Lonely as a Cloud´. It was an event in April, 1802 that inspired the line. When out walking with his sister Dorothy around Glencoyne Bay, Ullswater. William and his sister happened across a ´long belt´ of daffodils.

If like William Wordsworth, you are planning a trip to the Lakes, why not book into the Windermere Tranquil Retreat for a taste of luxury?