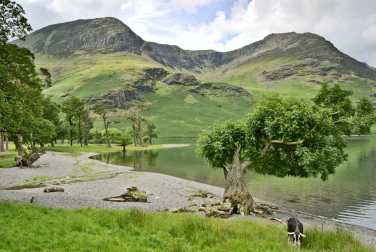 While our spa suites in Windermere are situated in the south of the Lakes, there are plenty more places to visit in Cumbria. Explore the Western Lake District for even more beautiful countryside. Filled with hills and fells, the Lake District is one of the most popular destinations in England.

Having recently been given UNESCO World Heritage Status, the Lake District has many wonderful areas to discover. One of the best ways to explore of course is on foot. After all, people from all over the world book into a Windermere Spa suite as their base for a walking holiday.

The famous author Alfred Wainwright has written many a book on the subject. In fact, his “Pictorial Guide to the Lakeland Fells”, is the ultimate guide to walking in the Western Lake District and indeed the Lakes in general.
Another book to refer to when walking in the Western Lake District is “Walks from the Ratty”. It’s in reference to the steam railway at Eskdale, as mentioned further on in this Windermere Blog. As for walking routes that are referred to in the book, the train station is a good starting point.

Other walks can take in the sights of Muncaster Castle and Blea Tarn, or towards the coastline and beaches of Black Combe bay.

Walking routes can often equally appeal to those on two wheels. Many of the journeys can take you cycling in the Western Lake District along roads which are equally as accessible on two feet. However, one particular cycling trail is that of the Eskdale Trail.

The 8-mile journey starts in Dalegarth and ends in Ravenglass. Although even those who are experienced riders may be longing for those hot tub benefits afterwards!

So even if you’ve driven to the spa suite, you can always bring a bicycle with you. After all at our Windermere Tranquil Retreat, there is plenty of parking available.

Enjoy a train ride in the Western Lake District

However, you reach the Lake District, arriving by train is pretty special. Those travelling from London can be in the heart of the Lakes within an hour. Lake District is also easily accessible from further North, while trips from the south can be a scenic route along the coast.

Once you’ve arrived, then Ravenglass and Eskdale Steam Railway is one of the star attractions. Much more than just a way to get from A to B, the 7-mile run is a particular favourite with both trainspotters and holidaymakers alike.

Where to stay in the Lake District

Spa suites in Windermere will provide you somewhere to relax and embrace the Lake District. If you book into our Windermere Tranquil Retreat, a private hot tub awaits. As well as wonderful gardens and beautiful views, the spa suites come equipped with Swedish saunas and cinema experiences.