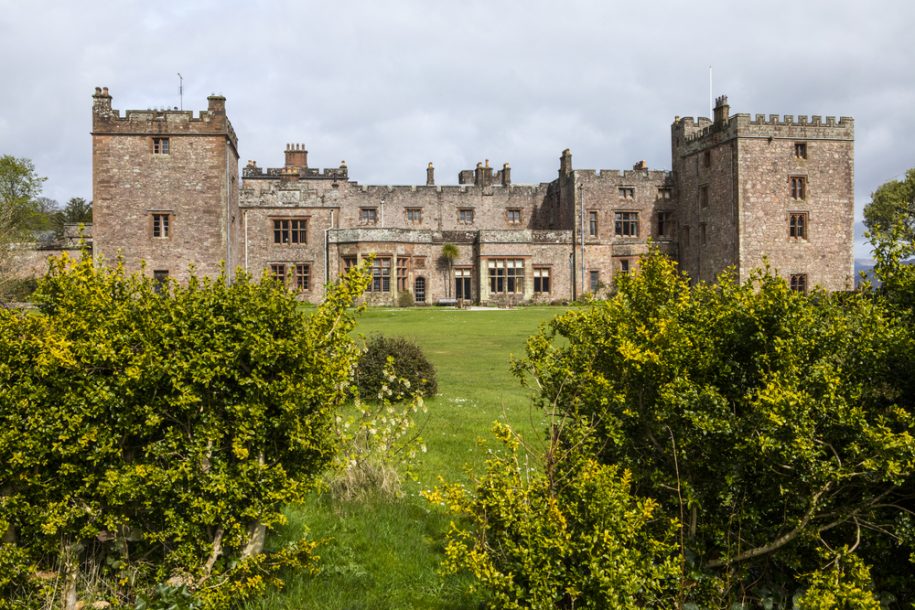 As well as a UNESCO World Heritage site in itself, the Lake District also has a number of English Heritage Sites. Not only that but when you are staying in Bowness, you are also within easy reach of several historic houses near Lake Windermere.

We start with possibly one of the most popular tourist attractions in the Lake District. Built in the late 13th century, the grounds also incorporate 77 acres of gardens. Within which sits the 12th century Church of St Michael and All Angels.

There are often open-air events held in the grounds, from medieval enactments to modern day cinema screenings. Inside the castle, visitors can experience traditional afternoon tea, or take in the history of this legendary castle.

With a beautiful backdrop overlooking the Lake District, Muncaster Castle is also home to the Hawk & Owl Centre. In fact, you’ll be hard pushed to find a larger collection of species anywhere in the country.

Further south in the Lake District is the village of Cartmel the historic house of Holker Hall. If you wish to be welcomed into a truly lavish estate, then Lucy Cavendish and Tor McLaren open their doors from March through to October.

Like many historic Houses near to Lake Windermere, Holker Hall has been handed down through the generations. When you plan your visit be sure to stop for lunch in the busy Courtyard Café. Here you can sample locally grown produce as you watch the world go by.

This particular house may not be as grand as others in the Lake District but is definitely just as important. After all, it was once home to one of the Lakes many famous residents, John Ruskin.

John Ruskin was among other things, both an artist and art critic. He was also well known for writing poems, travel guides and much more. Brantwood also overlooks Coniston water, where you can catch regular ferries to and from Lake Windermere.

While we pride ourselves on the private gardens at our Windermere Tranquil Retreat, Levens Hall is something else. The historic topiary gardens attract visitors far and wide. Visitors are drawn to the landscaping where the local gardeners have turned the displays into an art form. Furthermore, it’s only 20 minutes down the road from your spa hotel in Windermere

Even closer to home is Blackwell. The last of our Historic houses Near Lake Windermere is in Bowness-on-Windermere itself.  Having been built between 1898 and 1900 much of the house remains untouched to this day. The house was built as a holiday home to Sir Edward Holt, founder of the Manchester Brewery.

If you wish to stay in more modern accommodation in the Lake District, then spoil yourself with a spa suite. Rooms a the Windermere Tranquil Retreat come with a hot tub, landscaped gardens, Swedish barrel saunas and many other features.